We've all experienced it at one point or another. Something's broken in staging, or worse in production, but somehow it works on your machine. Same exact code, different results.

The answer to why this is happening is probably obvious — different builds, potentially different versions of things, and completely different environments.

Tracking down which one of these things is causing the issue is usually a little harder. Then, when you think you know what the culprit might be, reproducing that exact scenario locally to actually debug the problem can be difficult, time consuming, if not completely impossible.

Abstractly, Docker is an open platform for developing, shipping, and running applications. What that means concretely is that Docker provides a set of tools, APIs, and a registry that allows you to create, package, and run applications in a loosely isolated environment called a container.

To create a container, you must first build a Docker Image by creating a Dockerfile or using an existing Dockerfile from the Docker registry. A Dockerfile contains a set of commands similar to what a user would call on the command line that Docker will use to build an Image. By design, Images should be small and focused so that the parts of an application can be decoupled, ie. your proxy, your web application, your database. This strategy allows you to scale individual parts of your application and ultimately makes your application easier to debug.

Docker also provides an additional tool called Compose which allows you to create a network of multiple services — the parts of your application are also referred to as services in Compose. By defining a network with a docker-compose.yml file, Compose makes it incredibly easy to link all your services together and coordinate creating, starting, and stopping them.

What all of this means in layman's terms is that Docker gives you the ability to consistently create and recreate any environment anywhere without having to install anything besides Docker. Have legacy App A on Node 8, but want to build App B to with Node 12 and run them on the same server, no problem. Want to ensure legacy App A can be upgraded to use the latest version of MongoDB, bump the Mongo version in your Dockerfile and test it out. When your app is deployed, you can be confident that that it will function properly no matter what system your app is hosted on.

This post really just scratches the surface of what Docker and Docker Compose can do. For more a more in depth look Docker and how you could use it with Apostrophe see Apostrophe + Docker Workshop. 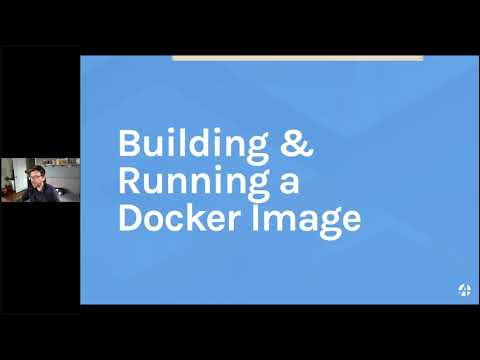 Apostrophe
Why Apostrophe Learn why Apostrophe is the right CMS choice for you and your users. Get Started Find your path to getting started creating an exceptional digital experience with Apostrophe. Features Take a deeper dive on Apostrophe's most powerful features. Use Cases Learn how Apostrophe can be applied to the unique challenges of your industry. Compare See how Apostrophe stacks up across many different classes of CMS technology.
Get Started Start here to learn about how we're creating better tools for building better experiences. Documentation Everything you need to know to create a new project and begin mastering Apostrophe. Extensions and Integrations Explore an ecosystem of extensions and integrations for ApostropheCMS, and contribute your own.
Case Studies See how Apostrophe helps modern organizations deliver digital excellence. Gallery Beautiful sites from across the globe built with Apostrophe.
Get Involved Connect with other developers and contribute to the community that's advancing ApostropheCMS. Blog Catch up on product updates, community stories, tech deep dives, and more. Partners Find a development partner for a project, or join our network of agencies. Roadmap Our roadmap on ProductBoard, empowering all users to contribute their voice to Apostrophe.
Apostrophe Assembly Turn an Apostrophe experience into a website builder platform, manage a fleet of websites with ease. Plans & Pricing Compare plans and packages for our commercial solutions. Contact Us Success is just a few clicks away. We're here to help you achieve your goals with Apostrophe.