In 1993 I hopped an Amtrak train from Connecticut to Seattle. Three days of the same designated vegetarian meal. Hoo boy. But the scenery was worth the food.

How did that turn out? Well I was, uh, popular with the critics. Audiences, not so much. Hey, I had fun.

There was one small problem: I didn't yet have a job.

Fortunately my former employer at Cold Spring Harbor Laboratory on Long Island called me up one day to ask: "hey, when you said you could rebuild our cell biology visualization software for this new World Wide Web thing... were you joking?"

I quickly decided I wasn't joking. And so I worked remotely from Seattle. Over a 14.4kbps modem. That's way slower than bad 3G for you youngins.

And so I helped take an application that was limited to a handful of researchers with access to high-end workstations (think "Unix! I know this" in Jurassic Park) and bring it to anyone with a decent PC and a modem. Slowly. Barely. But still.

That was a "new tricks" moment. And also a punk rock moment. Something that was difficult and reserved for a priesthood with the relevant skills became that much more accessible.

When JavaScript was invented at Netscape in 1995 (remember them - barely?) the initial goal was modest: improve interactions with webpages, especially forms, so users wouldn't wait... for... new... pages... to... load for every tiny interaction.

Still, most interactions ended in loading a page. But skip ahead to the release of Gmail in 2004 and the web changed fundamentally: nobody had to wait for a page to load anymore. Everything you did in Gmail felt instantaneous because you only waited for the data you needed, not the entire page.

So what was missing? Well... JavaScript could now do hard things, but it didn't do them elegantly. And to be blunt, that meant it was unfriendly. The language was still full of warts: big ugly things like the scoping of the "var" keyword, or building object-oriented code with "prototype chains." Somehow, the web had regressed from making programming more democratic to bringing back the special priesthood. And command line tools like babel and webpack, amazing as they are, can feed that feeling of exclusivity. Exclusivity stinks!

This is where "modern JavaScript" comes in. Just when JavaScript was starting to feel like an exclusive club with too many tools, the developers of modern web browsers at Google, Apple, Mozilla (Firefox) and Microsoft finally converged on the idea that browsers should evolve quickly and get better, not lock down to ancient feature sets forever. And that means that all modern browsers can now handle new language features natively.

What that means for new developers is that they can be modern JavaScript natives. Most will never have to worry about scoping variables in a loop, or prototype chains, or (shudder, groan) nested callbacks. They will always have known modern features like const, let, for ... of, class and async/await.

Yes, Internet Explorer 11 is still out there and yes, that means learning about Webpack and Babel when you reach that stage in your project. But they no longer have to be part of the initial learning curve, and that points toward a web where programming is open to everyone.

But what does this mean for old dogs like me? It's an opportunity for us to share the "before and after" picture, and to illustrate the benefits of moving to new things when they are truly better. And it's an opportunity to bite the hand that feeds us by making things better for the next generation of users and developers. And that will always be punk rock. Some things don't change.

It is with these thoughts in mind that I spoke on "ES6 and Beyond: Modern JavaScript" at the CMS Philly conference last month. The web gets better every day! I know; I've been here to see it. Check out the video; I think you'll enjoy it. There are cats. 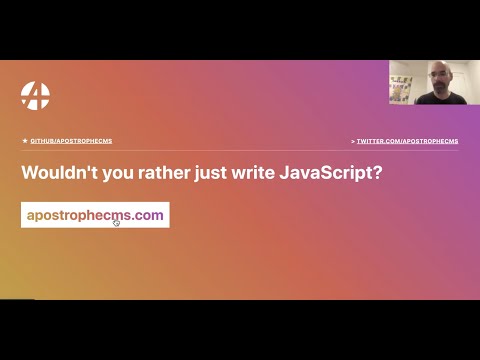 Democratizing technology is also one of the driving ideas behind ApostropheCMS, and that's no coincidence. We want to make sure content creation is in the hands of everyone in an organization, not just a small club of CMS backend devotees. We believe in delivering enterprise features like approvals and localization without compromising on ease of use. And everything we're doing in the design of the forthcoming Apostrophe 3 reflects that.

Apostrophe
Why Apostrophe Learn why Apostrophe is the right CMS choice for you and your users. Get Started Find your path to getting started creating an exceptional digital experience with Apostrophe. Features Take a deeper dive on Apostrophe's most powerful features. Use Cases Learn how Apostrophe can be applied to the unique challenges of your industry. Compare See how Apostrophe stacks up across many different classes of CMS technology.
Get Started Start here to learn about how we're creating better tools for building better experiences. Documentation Everything you need to know to create a new project and begin mastering Apostrophe. Extensions and Integrations Explore an ecosystem of extensions and integrations for ApostropheCMS, and contribute your own.
Case Studies See how Apostrophe helps modern organizations deliver digital excellence. Gallery Beautiful sites from across the globe built with Apostrophe.
Get Involved Connect with other developers and contribute to the community that's advancing ApostropheCMS. Blog Catch up on product updates, community stories, tech deep dives, and more. Partners Find a development partner for a project, or join our network of agencies. Roadmap Our roadmap on ProductBoard, empowering all users to contribute their voice to Apostrophe.
Apostrophe Assembly Turn an Apostrophe experience into a website builder platform, manage a fleet of websites with ease. Plans & Pricing Compare plans and packages for our commercial solutions. Contact Us Success is just a few clicks away. We're here to help you achieve your goals with Apostrophe.