On Friday, May 1, 2020, several of the Apostrophe team will be presenting a variety of talks and workshops as part of CMS Philly, Philly Tech Week’s “newest premiere digital content management event.” Originally planned for in person session, this event has pivoted to a completely virtual experience.

This event is for people and businesses who want to build their own website. It also provides professional development for content management system enthusiasts, creators, maintainers, designers, developers, strategists.

CMS Philly is an all day event with multiple tracks of talks and hands-on workshops/support clinics for all levels of experience.  Attendees and participants can expect exciting topics and opportunities in:

For more information or to register check out CMS Philly.

Alex Bea started his career managing Drupal sites for advocacy organizations, leading to tinkering, learning to code, project management, and finally to full-time development five years ago. He built and themed Drupal, Wordpress, and the occasional other CMS sites until joining P'unk Avenue, the birthplace of ApostropheCMS.

Now on the Apostrophe core team, he's focused on making the CMS great for developers to use and learn. When he's not working on or with Apostrophe, you'll find him deleting team members' merged PR branches, obsessing about code quality, and internally debating what his favorite HTML element is.

Node.js CMSes are less rare than they used to be, but most are designed for static sites or simpler use cases. Similarly, more CMSes offer in-context editing than in the past, but the in-context editing may feel bolted on or incomplete. PHP is great, but maybe you’re a front end developer who wants to do more in the back end or a PHP dev who simply wants to try something different.

We’re also less than a year away from the next major version release of Apostrophe, so this is a perfect time to dig in.

This talk will be presented by a former front ender and Drupal/Wordpress dev who went full stack with Apostrophe and will touch on:

Former designer, gone Full-Stack Developer. Greg has worked as a Lead Developer for clients ranging from one person startups to Fortune 100 companies. With 10+ years of experience, he's built everything from beard rating apps to financial account management software to APIs for voting on your favorite rock artist. Though he primarily writes JavaScript these days, he's still got some CSS chops. In each project, Greg strives to develop an intuitive experience for all users, be that of developers or end users.

This session is a 2hr workshop which will provide an introduction to Docker, an open platform for developing, shipping, and running applications. Preregistration is strongly encouraged. We'll cover some Docker basics as well as how you might use Docker to containerize an application.

It will also give an introduction to ApostropheCMS, an open source enterprise level CMS.

In this session, we'll also complete four hands on examples that will take you from creating your first Docker Image to creating a deployable Apostrophe site.

And to close out the day, Tom Boutell, CTO for Apostrophe Technologies will present ES6 and beyond: writing better code with modern JavaScript.

Tom has primary responsibility for development of the Apostrophe CMS, mentoring the development team and providing architectural guidance on enterprise projects. Mentoring other developers is the best part of his job.

Tom is best known for originating the PNG image format used by all websites today. More recently he has been actively involved in creating new node.js npm modules like sanitize-html, uploadfs and of course Apostrophe.

How does modern JavaScript help us write better code on the first try? Ready to say goodbye to "var," callbacks, and typing "then" all day? What are the benefits of new language features and are they worth the learning curve?

A straightforward talk for developers of all experience levels. With examples of each feature and its advantages. And cats.

Looking for a sneak peek, check out the deck from a previous presentation.

ES6 and Beyond: Modern JavaScript 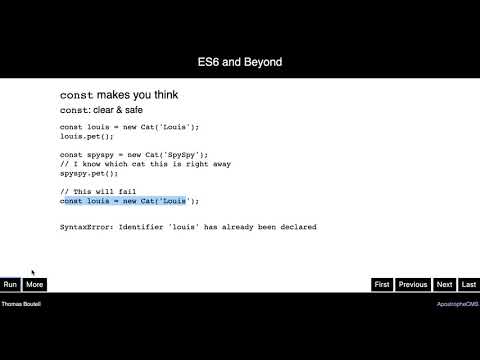 Apostrophe
Why Apostrophe Learn why Apostrophe is the right CMS choice for you and your users. Get Started Find your path to getting started creating an exceptional digital experience with Apostrophe. Features Take a deeper dive on Apostrophe's most powerful features. Use Cases Learn how Apostrophe can be applied to the unique challenges of your industry. Compare CMS Solutions See how Apostrophe stacks up across many different classes of CMS technology.
Documentation Dig into our documentation for everything you need to know to master Apostrophe. Start an Apostrophe Project Jump right in and start building now with straightforward tutorials to get you up and running. How to Contribute Be a part of creating the most advanced and user friendly open source CMS built for the modern web. Extensions and Integrations Explore an ecosystem of extensions and integrations for ApostropheCMS, and contribute your own.
Case Studies See how Apostrophe helps modern organizations deliver digital excellence. Gallery Beautiful sites from across the globe built with Apostrophe.
Get Involved Connect with other developers and be a part of the community that's advancing ApostropheCMS forward. Blog Catch up on product updates, community stories, tech deep dives, and more. Partners Find a development partner for a project, or join our network of agencies. Roadmap Our roadmap on ProductBoard, empowering all users to contribute their voice to Apostrophe.
Apostrophe Assembly Turn an Apostrophe experience into a website builder platform, manage a fleet of websites with ease. Apostrophe Enterprise Reduce time to market for Enterprise scale digital experiences with our most powerful distribution. Plans & Pricing Compare plans and packages for our commercial solutions.